Graffiti is a form of vandalism where images or text is applied on a public place with paint, aerosols, paint pens, ink or simply by scratching. High costs are incurred to remove the graffiti and even then it often still leaves traces in the form of ghost or shadow images. Glasfolie Suncontrol now offers the opportunity to protect your glass against graffiti and make removal relatively easy, without leaving traces!

Anti-Graffiti Window Film is a tough polyester film that is fitted with a very strong layer of glue. The Window Film is entirely transparent and is ‘invisible’ when applied to the glass. 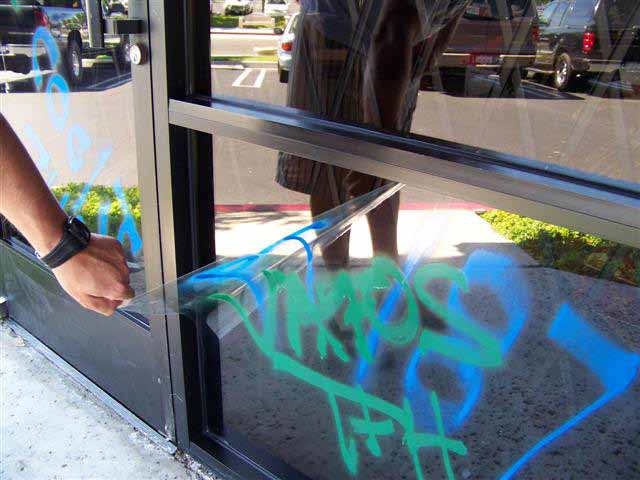 Protection
The film protects the glass from vandalism in the form of graffiti. The ink or paint, when applied to the Window Film, does not penetrate the glass. The film is then relatively easy to remove, making the undesired graffiti disappear. Then you can simply apply Anti-Graffiti Window Film to the glass again to make it like new and protect it against graffiti vandals.

Glasfolie Suncontrol innovates
The technology for manufacturing Window Film is continuously evolving. The current types of Window Film are manufactured using the highest quality polyesters, which are constantly tested for their quality. The polyester is perfectly clear and forms an optical
laminate with the glass.

More advantages of Anti-Graffiti Window Film:
UV-filtering
The Window Film filters out ultraviolet radiation from sunlight. This protects your valuable interior against discolouration.

Shard-binding qualities
In the event of the window breaking, the Window Film also prevents damage and injury that can be caused by flying shards. The thick and tough polyester film keeps the glass together in the event of breaking. (Meets the NEN 3569 fall through protection.) 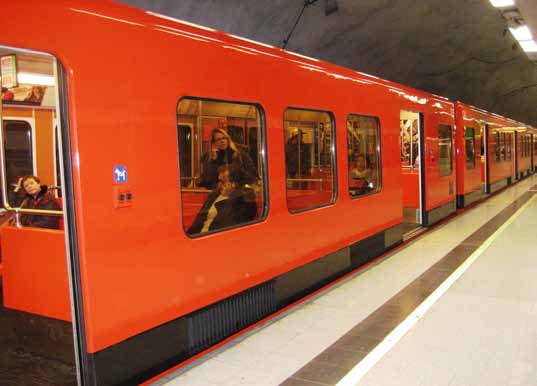 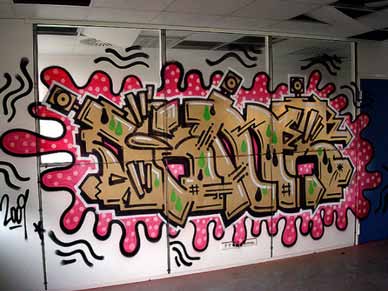 NO BUILDING IS THE SAME

Because each office or company has its own particular needs, Glasfolie Suncontrol has developed a series of films with different, specific properties. Whatever your situation, there is a Window Film to meet your needs.

Glasfolie Suncontrol has carefully documented the figures for you, but cannot be held liable for any incorrect data 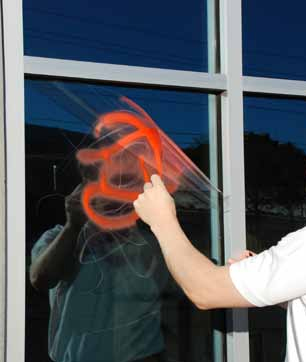 We have reference addresses for applications of the various types of film, which we are happy to supply you with.

Applying
Glasfolie Suncontrol has its own application service. Besides having experience in applying the film, our employees also have the right equipment. They will only apply the film when the temperature of the surface is between 5 and 25 degrees Celsius. After approximately one month, optimal adhesion is achieved and the film is completely tightened and fixed to the glass.
Cleaning
The strong polyester film is very resistant to cleaning. The best cleaning agent to use is clean water with a dash of household vinegar. The best tools: a clean sponge and chamois. Watch out for sand grain and old, hardened rubber squeegees! Other sharp tools can also cause damage. Aggressive cleaning chemicals are not recommended. Detailed cleaning instructions are supplied with the delivery of the film.
Dimensions
The width of the roll the film is supplied in is 152 cm. This means that when processing the film, the maximum width of a window is approximately 150 cm. But if your windows are higher and wider, the film can still be applied. For larger windows a minimally visible seam is made when our experts apply the film.