Users of offices, hospitals and public buildings have high demands with respect to the level of comfort. Roof-lights skylights and glass roofs are still a weak link in the climate control of buildings.

The architectural value of these roof constructions is unique, but the heat and light penetration is often a problem. Specifically to solve these problems, Glasfolie Suncontrol has developed the special Skylight film for plastic and glass. By applying this Window film, these rooflights are adapted for the highest demands. 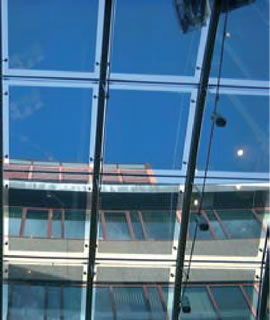 Why is Skylight film so special

Skylight Window film is a heat resistant polyester film coloured in the mass, with an adhesive layer that has been developed to be applied on plastics.
Once a Skylight film has been applied, it forms an “optical laminate”. Meaning: it becomes one with the surface. Skylight film is resistant against the natural forces of plastic: strong expansion (tension) and outgassing (the passage of water vapour).
Sun Control Skylight film works by reflection and absorption of the solar energy. 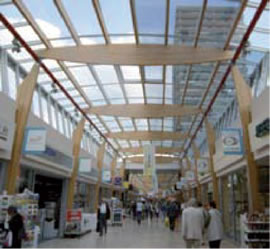 Roof-lights fitted with Skylight film enhance the comfort of the inside climate, not only due to its sun and heat resistant properties, but also because annoying glare is significantly reduced. Often by 85%! Also the reduction of sun penetration can be as much as 41%. Moreover, Skylight film filters the ultraviolet radiation from the sunlight. This protects the interior better against discolouration. The Window film ensures more privacy. During the day, the film hinders peeping into offices and buildings.
When your company is equipped with air-conditioning, Skylight film saves on the energy consumption; the glass openings are demonstrably better insulated. Due to this, the costs of internal climate control reduce drastically. Due to a special top layer, the film is extra scratch resistant and more resistant against wear. 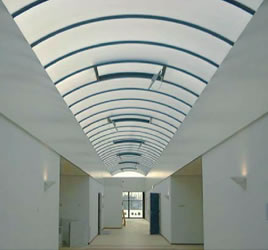